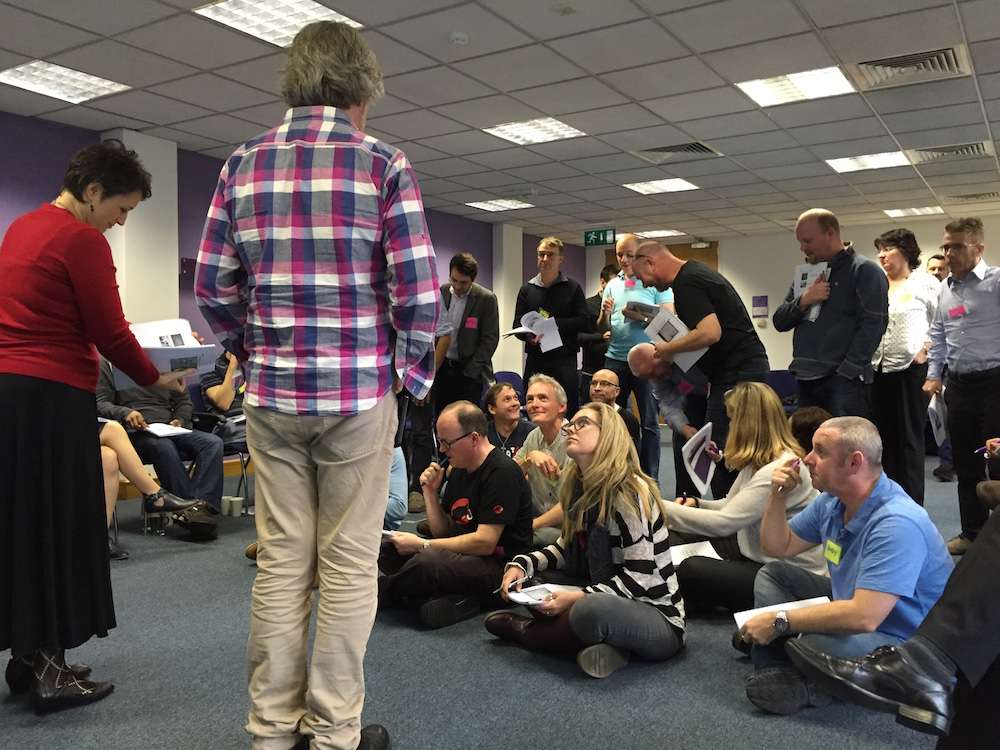 It’s Saturday. Yesterday was the last of 3 days that reminded me of when my sons were born. The magical space my wife and I shared throughout the few days after my first son were deeply intimate and had a spaced out quality that something truly miraculous had happened and things would never quite be the same again. We had waited so long for the birth, thinking that the birth was the single event, but finding that actually; the journey had only just begun.

Does this sound like a review of a business course? Well if you are surprised, and a bit confused, then read on.

I had already experienced one transformation at the hands of Lyssa. A few years ago when I realised that the technical roles I was being employed for were not only unsatisfying to me but that I wasn’t even fulfilling them. What I was actually doing was coaching teams and organisations but I had no vocabulary for what I was doing. Reading Lyssa’s ‘Coaching Agile teams’ book gave me that and set me on a journey of organisational design coaching that left me satisfied at work and finally able to combine my sense of community and high hopes for humanity with my work in large organisations. I have never looked back.

The start of the course was the shape of things to come. With all of us sitting expectantly in a horseshoe of chairs around the room, somewhat quiet, somewhat insular, and as separate human beings from different organisations. Respectable organisations too. Large corporates that demanded us to be professional. And here we were, professionals primarily, people second, and not yet friends at all.

Lyssa and Michael have a synergy that really makes them seem like a single person. It’s almost impossible to see where one starts and the other ends. We started the first exercise almost immediately and within ten minutes the projected mask of professionalism from the attendees had disappeared and was replaced with something far more powerful. The innate ability to trust those around us, and for us to to be able to show who we really are and uncover what was really needed for the 3 days ahead. The creation of a safe space for transformation had dramatically but almost imperceivably been created, a womb-like feel about the room appeared to us all.

We moved through some real group practices to both learn about ourselves and that we can reuse in the organisations we all came from to get underneath the mundane to the real issues, the real things that need sorting out.

Swapping from practice to theory to practice was almost unnoticeable, and I don’t think I sat still for more than 30 minutes ever.

Different perspectives are a key understanding that any good coach needs to have in their toolkit, and we found a systematic way to uncover these in real world examples and problems from our organisations. We explored the ‘I’ space, the ‘we’ space, the ‘it’ space and the ‘environment’ space. Most of us had only considered a few of these, and expanding our awareness to other perspectives gave an expansive internal quality that allowed new solutions to be found that were previously unavailable.

there is no role playing in this class, only real playing.

We learnt how to really listen. Not just to listen in the usual sense. But with a powerful framework that allowed a deep rapport and connection between the listener and the speaker. A sense of acceptance, of moving past the mundane occurred, and we all found ourselves speaking from the heart, about things perhaps never shared before. About our working lives, about the roles we have, about our organisations, about our families and ourselves.

Listening is vital, but exploring the speaker’s topic of choice is an art form. We learnt the difference between mentoring and coaching. We learn the different types of coaching. These are fundamental. I didn’t previously realise that coaching is not one thing. There are many aspects to it and not every coach needs to have all but every coach needs to have some of the core elements. We learnt those elements.

We learnt them through the Agile coaching competency framework. This stuff is not random. It is the complete picture of coaching. It includes teaching, mentoring, the Agile / Lean practitioner, facilitating, professional coaching, and 3 types of Agile coach such as technical, business and transformational.

Now, without this framework, coaches seem to me like a mechanic without a spanner.

We watched beautiful examples of coaching and mentoring given by Lyssa and Michael. They coached different attendees about specific things that are going on at their work. The problems at first seemed to have no obvious answer. Every solution thwarted by a corresponding downside.

Using the techniques that we had been taught, Lyssa and Michael separately used mentoring and coaching techniques to expand the attendee’s consciousness, to allow them to see the problem from different perspectives, widen the viewpoint. Often we found the problems were in a totally different place than where we thought and that the answer fell naturally out of the session and from the person being coached. These were big problems. Real problems. Problems that are life changers. These were problems that had been making attendees lives painful at work and had perhaps been going on for months.

These were problems that were unravelled in less that 15 minutes of professional coaching.

We discovered the organisational consciousness and explored Frederic Laloux’s work, as well as Integral Agile. We presented to each other, we coached each other, we explored many many more activities, such as force field analysis (nothing to do with star trek), impact analysis, sphere of analysis, 360 reviews and many more.

Many attendees unlocked problems and stresses that had been bothering them for years, both at home and at work. Due to the power behind this course and Lyssa and Michael’s teachings.

Every now and again in life, perhaps only a few times, an event changes you forever. Something special happened in those 3 days. Potential was unlocked. Tools were learnt. Hearts were opened. These abilities will travel with the attendees now back to their organisations and can be used to powerfully unlock real problems. To advance the adoption of Agile, overcome cultural and people problems, to solve system dynamic issues, and to make people’s lives at work and home better.

This course lays the foundation for real transformational change. Building upon what we learnt here is vital. We have laid the foundations of real change. We now have a chance in the organisations we came from to really make Agile work. The probability of success has just increased hundreds of times. The problems of today are in the minds of people. Unravelling that, is the key to success. Michael and Lyssa have given us a way to do just that.

The slides from Lyssa and Michael’s evening meetup called “What Would it Take to Have an Agile Enterprise?” can be viewed here.

Learn more and get certified!

Learn more about coaching agile teams on our highly-impactful and certified agile training courses in London and online.