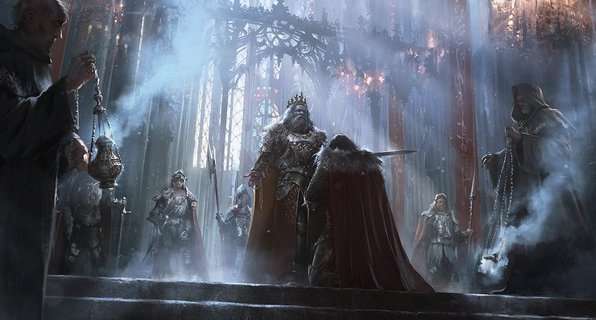 An Agile Tale – The King’s Heir

Staring deeply into the fireplace is King Rupert the Firm-Stepper. If you were close enough to him, you would hear him slowly repeat the question that he has been contemplating for many moons now.

“Who will succeed, who shall rule this kingdom after I”

He repeats this question into the fire, as if in hope that the fire might spit forth a spark of inspiration.

He was called Firm-Stepper as he was known to only step forward with plans when the ground was known to be firm, he would never take a risk. He was once heard to bellow across the halls

“Google Docs on the Palace Computers, have you gone mad, what about security!!!”

they only wanted to use it to share recipes between the many palace kitchens.

This was a time when your greatest quality was added on to your name so all knew what they could expect from you by just your name. When he was younger, and his quality had not yet been named, he had hoped to have been known as Rupert The Kind-Hearted. He had kindness in him, but taking a less risky approach had been more important to him than kindness and so he was known as King Rupert The Firm-Stepper.

Firm-Stepper had four children, all of which had very different qualities. He was sure that the kingdom would be safe in any of their hands, but the journey that they would take the kingdom on during their reign, the risks that they would expose the kingdom to, the prosperity they may achieve, the happiness of the people, all of these things could be vastly different depending on which of his children ruled.

The King felt he knew his children well, but a decision of this magnitude could not be left to intuition, he had to hear first-hand in their own words, what would they do if they were to rule the kingdom.

The next day Firm-Stepper took his four heirs riding, they rode high up into the mountains, it was a beautiful day, the sky was clear, the air was warm, and the servants were following not too far behind.

They stop at a beauty spot, which is known for the panoramic views it provides across the kingdom and King Firm-Stepper asks his heirs this most important question.

“Busy-Bee, Power-Seeker, Tread-Well, Punk-Agile, my children, I have decided that it is time for one of you to become the next King or Queen of this great land. If you are to rule, and I am to be your subject, I feel that I should know what kind of land I shall be living in”.

Busy-Bee was the first to speak. “In a kingdom ruled by me, there will be lots of new initiatives. No one will be standing still, there will be files, roadworks, noise, it’s going to be reeeeaaaaallllllly busy and we shall have beautiful charts to track the progress of everything”.

“But which direction will this business of busy-ness be taking the kingdom Busy-Bee?” asked Punk-Agile.

“Ummmm……better……..a…….better direction” was the reply (Sadly, this is genuine level of thought a number of people I have come across have truly put into their visions for their kingdoms).

Power-Seeker weaved a dark and complex story. She spoke of destiny and dynasties, brothers in arms and a Kingdom made of Kingdoms. She gave comprehensive plans of which neighbouring kingdoms were vulnerable that could be consumed with wealth or simply overpowered. Power-Seeker had been thinking about this for a long time. Was this finally her time to rise and do the things for the kingdom that she considered her weak father had been too afraid to do.

The sheer scale of Power-Seekers vision made Tread-Well go white as the blood drained from his face in shock, for Tread-Well was indeed his father’s son. He had taken on his father’s risk-free traits and so provided a simple 1 page plan on an A3 Scroll which he had been carrying around with him since he was a young prince. This plan showed very clearly that Tread-Well was intent on doing nothing different. Why break a winning formula. The people seemed happy enough, we were prosperous enough and the kingdom was big enough, so he saw his job as King would be to maintain everything as it was under his father’s rule.

Punk-Agile points out to the vista of the kingdom in front of them. “This kingdom spreads further than any of us can see. I can ride my dragon through these skies until day turns to night and still not reach the edge. How can one person, or even us five together, know what is best for every person in this land?”.

“The people of one side of this land are different to the people from the other side of this land. Even in some villages, only a short distance from each other they speak virtually different dialects, the cities of Java and UX do not use the same writing.”

“If I ruled this land father, I would devolve power down to our people. They are the ones who really know what challenges we face. We should give them the power to respond to the things they are hearing, seeing and feeling on a daily basis.

Do we really think that sitting in our palace, high on the hill, that we know what it is like to live in this kingdom. We are surrounded by people whose job it is to hide the truth from us, as though the truth is ugly. If we feel the truth of our kingdom is ugly enough to hide from, then it is up to us to make a new truth a truth we can be proud to claim as our own.

We don’t know the truth of this kingdom, but our people do. They are the ones who sit in the taverns at night mixing with friends from other towns, merchants from other kingdoms and the Spies from the Mountain Lands. Our people know better than any of us which things would make us stronger, where we are vulnerable to attack and what would bring them happiness, I say we give power to our people”.

“But we have Mayors for each city, I have given the people power”

“A title is not power father. The power to choose if Schools in your city are made of brick or wood is not power, it’s just an illusion of power. You know what I say is true father, and even though it makes you scared, I truly believe that the people can be trusted, so we should trust them. Our people are our kingdom, and as such they should make the decisions which are needed for us to flourish”.

On hearing this, the King knew what must be done and made his proclamation there and then. “My children I have heard all that you have to say, and I can see what the future of this land must be, and as such, my new Heir is Tread-Well, for his is certainly a plan that I can support and will leave this kingdom in SAFe hands.

In a forgotten corner of the kingdom, deep in a dense forest, we see another fire. The fire roars, spits and crackles as hundreds of people sit around the fire nourishing each other with tales of sorrow, hardship, love and joy. It’s the end of their day and they have worked hard for each other and now they eat, drink and celebrate in their successes together.

These are the people who could see that life in a kingdom of safety is not a life well lived. A soulless life lacking passion, purpose and motivation. There is a rumour that one of the Kings children lives amongst them, but no one can tell as here we are all forest people who like nothing more than getting messy, playing deep in the dirt of life.

“Never doubt that a small group of thoughtful, committed citizens can change the world. Indeed it’s the only thing that ever has”. Margret Mead

Who wants to build a new type of powerbase? Apply Here

My Request: My belief, is that you knowing what I have shared with you here (and all messages written under the “Punk Agile” banner) will result in better transformations and increased happiness. If you found this helpful, I would be grateful if you could Share this posting via Linked In, so that the message can spread further, beyond my network and into the lives of others who could benefit from hearing this too – Thank you for sharing the knowledge

If you liked this, you may also like my other postings:

I think that organizational culture is broken and that it is our duty to mend and heal it for the sake of the people stuck within those dysfunctional, destructive systems. My mission is to help organizations to create humane environments which nurture and inspire so that we can unlock the potential of our people and increase happiness and engagement levels at work.