Myself and Myron Parks collaborated for the first time this month for the AWA’s Innovation and Leadership Mastery programme. We co-lead a workshop that helps organisations develop better workspaces and workshops for neurodiversity.  The workshop was described as everything from uncomfortable to transformational. In part, this was due to the way it was presented.  Myron ‘unmasked’ for us, and presented his experiences as someone with ADHD, in a way that was true to his ADHD.  This was one of the most powerful moments, and we wanted to share that experience a little wider than that group.

Gaining a deeper understanding of ADHD

Myron’s presentation explained what it’s like to have a lack of time sensitivity and reduced verbal, visual memory capacity, but really fast processing speed.  He described it as seeing all 10,000 frames of a film at once, but not having the RAM to study all the information at once, so you grab one card, but maybe have a ‘gut feel’ for the patterns that you know are within those other 9,999 frames.

It’s a powerful analogy. From the drawing and audio below you’ll see how his ‘unmasked’ presentation demonstrates what this is like. Myron skipped and revisited topics. Some concepts were linked, but the way that it was presented was like a whole deck of cards about ADHD being dropped on the table.  It was only once I’d visualised this that I could really see all of the links that were there. As a result, I had a deeper understanding of the power of Myron’s brain. 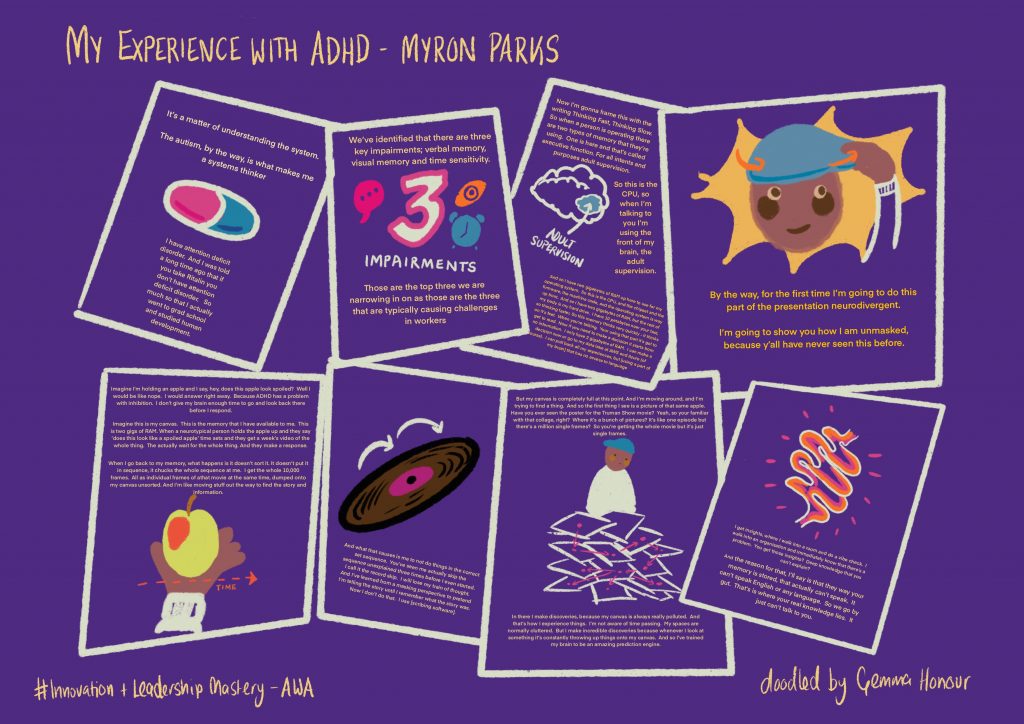 Listen to Myron’s audio presentation and use the sketchnote* above to help navigate. By the way, the sketchnote doesn’t always follow the exact order that Myron’s presentation did, since I’ve tried to group by themes, rather than order.

*You can click the sketchnote to open a new window with an expanded version.

This article has been created in collaboration by Gemma Honour and Myron Parks on the Innovation and Leadership Mastery Program. Gemma is an Agile Coach and Visual Thinker who believes in the power of diverse thought and group wisdom. Myron is an Agile Coach, Enterprise Strategic Agilist and US Navy Veteran.